Meagyn's Pet Bear is a nonmember land pet that was released on November 29, 2018, and removed from stores on January 4, 2019. The worth of a bear usually depends on the demand of the features and how much a user is willing to trade for a bear they like.

A bear made after January 4th 2019 is considered "hacked", and are worth a clothing beta-few den betas (maybe more, depending on the jammer). Though AJHQ has given pet codes to people which allows a jammer to make a bear from a pet code, the bear is considered "hacked", even if it is not really hacked. More information on hacked bears is shown below.

The starting worth for a Meagyn's Pet Bear is a bad long. The max worth is undetermined, depending on if you're a collector or not, but a perfect bear (also known as 'perfs') can get around 5 black longs, maybe more or less depending on the person.

NOTE: The starting values for different features assume all other features are common. Values can raise further based on the other features a pet has. Some bears have better demand even with bad features.

The most common color is brown, and it usually doesn't have the best demand unless the other features are better. Solid color bears have better demand that bears with a different secondary. Secondary colors also do not matter as much at the primary color, unless it is a solid color or make the bear a certain theme (e.g. carrot, watermelon, Christmas, etc.)

The colors labeled 5 (black, white, dark brown, light brown) are common. They start at a Bad long, and can go for an undefined amount.

The colors labeled 4 (teal, dark purple, yellow, dark red) are somewhat common. They start at a Bad-decent long, and can go for an undefined amount.

The colors labeled 3 (light red, pink, purple-pink, lilac, dark blue, purplish bluish) are medium. They start at a Decent long, and can go for an undefined amount.

The colors labeled 2 (sea green, lime, dark green) are somewhat uncommon. Thesy start at Decent-good longs, and can go for an undefined amount.

The colors labeled 1 (mint, orange, mustard) are uncommon. They start at a Good long, and have an undefined maximum.

In this chart, it shows how uncommon the eyes are. However, the demand of the eyes are quite different. Eyes beside lash do not necessarily affect the worth, instead affects the demand.

Oval eyes, although being the most uncommon, have a medium demand and are usually preferred with a frown. You would have to find someone who collects oval eyes or like oval eyes to get a good offer. They start at a good long, and the max is undefined.

Squint eyes have a medium demand. They start at a Decent long+, and the max is undefined.

Closed eyes also have one of the best demand. They start at a decent long+, and the max is undefined.

Round eyes and almond eyes have the best demand. They start at a Decent long or more, and the max is undefined.

In this chart, it shows how uncommon the mouths are. However, the demand of them are quite different. Smirks have the worst demand, while no mouth has one of the best demands.

Mouth 4 (no mouth) is one of the ideal mouths, and has the best demand. It goes well with almost any features, and usually start at a Decent long, perhaps less if it has low demand features.

Mouth 3 (smile) has a medium demand, go well with certain features. They usually start at a bad long.

Mouth 1 (frowns) also have one of the best demand, however are very expensive. They are hard to trade away unless they have other features with good demand. Frown bears start at a good long, possibly more, and can go for a lot more if all other features are good. 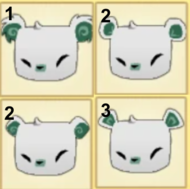 Ears do not affect the worth of a bear as much as other features.

Triangle ears have worse demand compared to the other ears, but do not affect the bear's worth that much.

Square and circle ears have medium demand, but do not affect the bear's worth that much.

Fluffy ears have the best demand when they are in a combination of either, mohawk + fluffy ears or fringe + fluffy ears. With other hair, they have similar demand to the other ears. 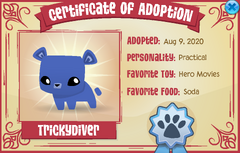 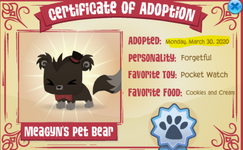 Hacked bears are bears made after January 4, 2019. They are usually made in the late 2019 and/or 2020, and have 2 most common combination of features. Hacked bears with other features can exist, but are not as common as the hackers found it easier to mass produce bears with the same features.

Note that having a hacked bear does not get you banned, only hackers who create them will possibly be banned by AJHQ.

Be aware that some people use these bears to scam/trick others, as hacked bears have lower values than regular bears.

Hacked bears usually start at a den beta, but certain hacked bear collectors are willing to do more. Many of them go for a long wrist, sometimes even more as hacked bears are often very cute. Note that the features of a hacked/custom bear does not affect the worth, only the demand.

Custom bears are bears made with a code given by AJHQ. There is no difference between them and hacked bears, besides the fact that custom bears are not hacked into the game. They are worth the same as any other hacked bear, so be careful while trading for custom bears! Custom bear codes start at a red long, but many go for 5-10+ solids. If you "Buy" a bear code, the safe way to trade for it is have them make the bear you want, then trade the solids for the bear.

Where to Ask for Help with Bear Worth

However, the best way to find out you bear's worth is by asking someone reliable in bear worth.

Butterfly.legend.fairy, the person who created this page, is a reliable source for information about bear worth.

Community content is available under CC-BY-SA unless otherwise noted.
Advertisement